two weeks have passed, and again we have another SCM-Manager release: 2.12.0. We have four gifts for you, and one for us: Those of you using Mercurial can expect a much more simple setup, SVN users can now import SVN dumps, and all of you together can use a feature known from 1.x again: the archived repository. Last but not least you now can create links for specific code lines in the source view. And of course we fixed some bugs, for example an error when you wanted to take a look at files with non-ascii characters in their names.

Again and again people seeked help for not working Mercurial setups: Sometimes a path was wrong, sometimes the configured python version mismatched the one used by Mercurial, and so on. This should belong to the past now. We managed to simplify the somewhat complicated setup used to start Mercurial processes. You no longer need to specify a python binary, because the communication layer between the SCM-Manager and the Mercurial process is now implemented as an extension. We would love to get feedback for this one.

With the last release we introduced the import of git and Mercurial repositories from other servers. Now we added the possibility to import SVN dumps. 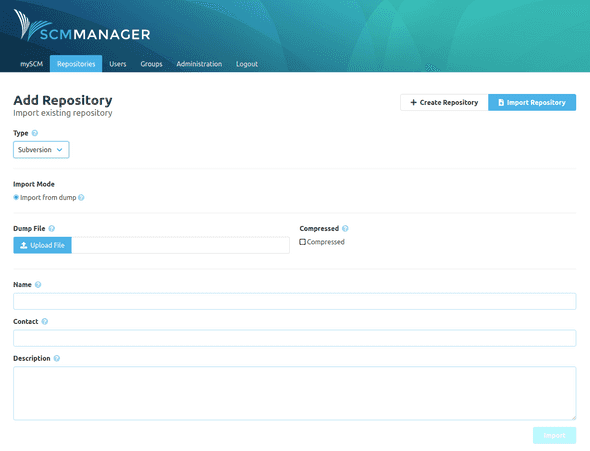 You may have known this feature from version 1.x, now it's available in 2.x again: You can mark repositories as "archived". Such repositories cannot be modified any longer.

Sometimes you want to point to a concrete line number in a source file, for example to send it to a colleague in a chat. Now you can simply create a URL for a line. Simply click on the link icon that you will see when you hoover over a line number. The generated URL will contain the line number and the current revision, so that the link will still work after the source has been changed. 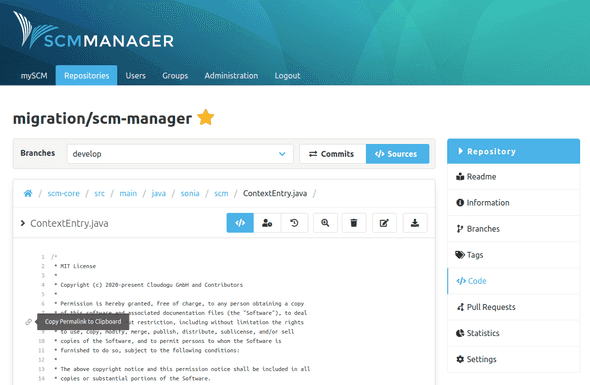 The gift we made for ourselfs is this: We start migrating our builds from Maven to Gradle. With the increasing code size of SCM-Manager our builds took more and more time, slowing down our development speed. In a first step we created the Gradle SMP Plugin to build our plugins with. We will now collect practical experience with this, but the first look is promising.

Are you still missing an important feature? How can SCM-Manager help you to improve your work processes? We would love to hear you most needed features!

Have some questions or suggestions for SCM-Manager? Connect directly to the DEV-Team on GitHub or our Support channels.